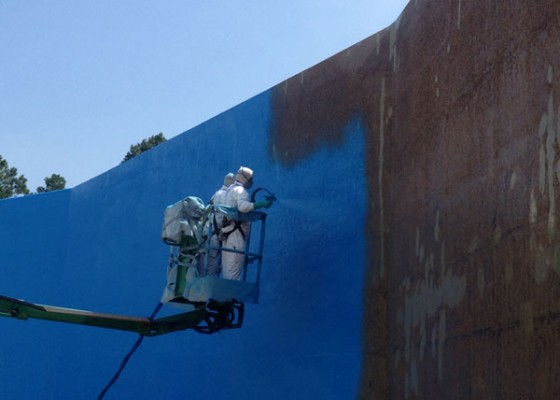 This client was looking for the most economical and practical way to repair and rehab an existing water storage tank that was built in 1941. Over the years the tank had developed numerous cracks and was starting to deteriorate. This tank was and is a valuable asset for the infrastructure of the client. It is used in fire protection and backup water supply for drinking water. This company has a daily work force of over 30,000 people. In today’s economy rehabilitation was more cost effective than a new tank.

Contracting and Materials, Inc. proposed using a pure polyurea coating to spray in the tank as a liner. The polyurea was the only viable option because of the cracks and movement of the concrete structure. The major cracks were repaired using a high grade epoxy and the small cracks were bridged over with the polyurea. Prep on the concrete was done with high pressure water blasting and standard grit blasting where necessary. The project took approximately six weeks to complete and should give the base many more years of uninterrupted service.